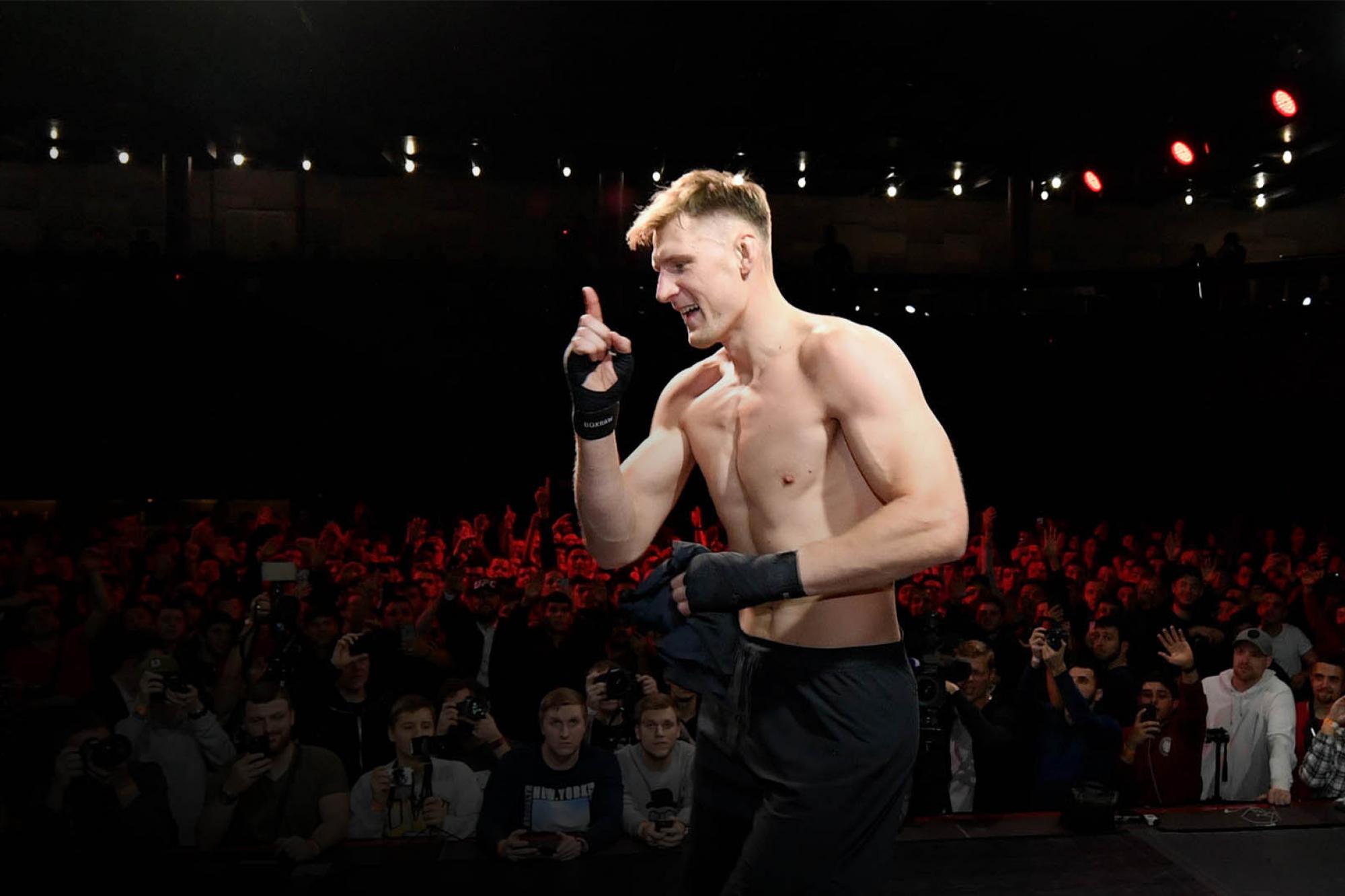 Alexander Volkov: "This Is My Show"

There is a weird phenomenon that happens frequently in professional sports where the broadcasters will be talking about a particular statistic or possibility, like how many consecutive free throws Stephen Curry has made or how many passes Aaron Rodgers has thrown without an interception, and then without fail, Curry will clank one off the iron or Rodgers will throw one to the other team.

The reverse happened to Alexander Volkov in his bout against Derrick Lewis last October at UFC 229 in Las Vegas.

Despite hurting the Houston-based heavyweight right out of the chute and controlling the vast majority of the contest, the broadcast team of Jon Anik, Joe Rogan and Dominick Cruz continued to remind viewers throughout the three-round affair that Lewis carries the kind of power that can change the course of a fight in a flash. It was why, they argued, that despite having him hurt at various points, Volkov remained vary of rushing in and pushing for a finish, opting instead to show cautious respect for the devastating power Lewis could uncork at any moment.

With 40 seconds left in the bout, Lewis just missed with one of those sledgehammers and then 22 seconds later, all that talk of his ability to alter a fight with one punch turned into foreshadowing, as “The Black Beast” felled Volkov with a clubbing right, snatching a victory away from the towering Russian in the waning seconds of a bout he had dominated. 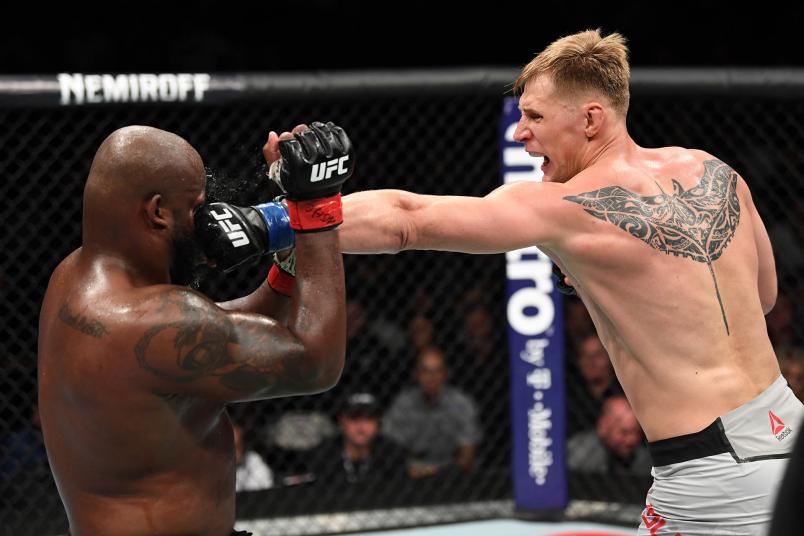 Vs Lewis at UFC 229 (Photo by Josh Hedges/Zuffa LLC)

“I used this time to my best ability,” said Volkov, who is set to return for the first time since facing Lewis when he takes on Greg Hardy in the co-main event of the UFC’s return to Moscow this weekend. “All this time I was focused. I trained a lot and I am in best shape of my life. I had time to work on my mistakes and become better as a fighter.”

Volkov wasn’t meant to be out of action for this long, as he was booked to face Alistair Overeem in the main event of this spring’s debut fight card in Saint Petersburg, but an undisclosed injury forced the Russian veteran from the matchup, leading to what is now the longest layoff of his career.

“I don’t have any problems with the break,” said Volkov, who had won all four of his UFC appearances and six straight prior to his fight with Lewis. “It only helped me to heal and train a lot more.”

But even after an extended stay on the sidelines, Volkov’s return to the Octagon couldn’t go off without a hitch.

Initially, the six-foot-seven hometown fighter was initially slated to face former heavyweight champion Junior Dos Santos, but just 18 days before the event, the Brazilian announced via his Instagram page that he would be unable to compete in Russia due to a bacterial infection in his leg.

Hardy, who had fought four days prior to Dos Santos’ announcement, quickly jumped at the opportunity to share the cage with a Top 10 contender, leaving Volkov to shift from preparing to face a seasoned veteran to readying to square off with a raw, relative newcomer with nothing to lose.

“It’s fun,” he said when asked of the dramatic late shift in opponents. “Inside I feel it’s all the same — it’s about me; this is my show.

“I didn’t know a lot about Hardy and never saw him fight,” Volkov said of the former NFL defensive lineman, who made his UFC debut in January and is just seven fights into his professional career. “It does not matter for me who would be the guy to replace Dos Santos — all I wanted was to remain on the Moscow show.

“I am proud to be part of this event,” added Volkov, who has competed in his hometown seven times before, but is fighting in Russia as a member of the UFC roster for the first time. “It is a great motivation and I will try to make it worth it for every fan who will visit the show.”

Volkov’s desire to remain on the card and get to fight in front of friends and family in Moscow are completely understandable, though the matchup with Hardy does come with considerable risk.

Though he’s still green, the 31-year-old is an explosive athlete with clear power and a willingness to let his hands go, and as everyone saw in the fight with Lewis, it only takes one clubbing blow landing square to turn a “sure win” into a “sudden loss,” though Volkov doesn’t see that being an issue on Saturday.

“I doubt Greg will be able to deal with my power for all three rounds,” he added. “I will go in there, show my skills and I will finish him.”