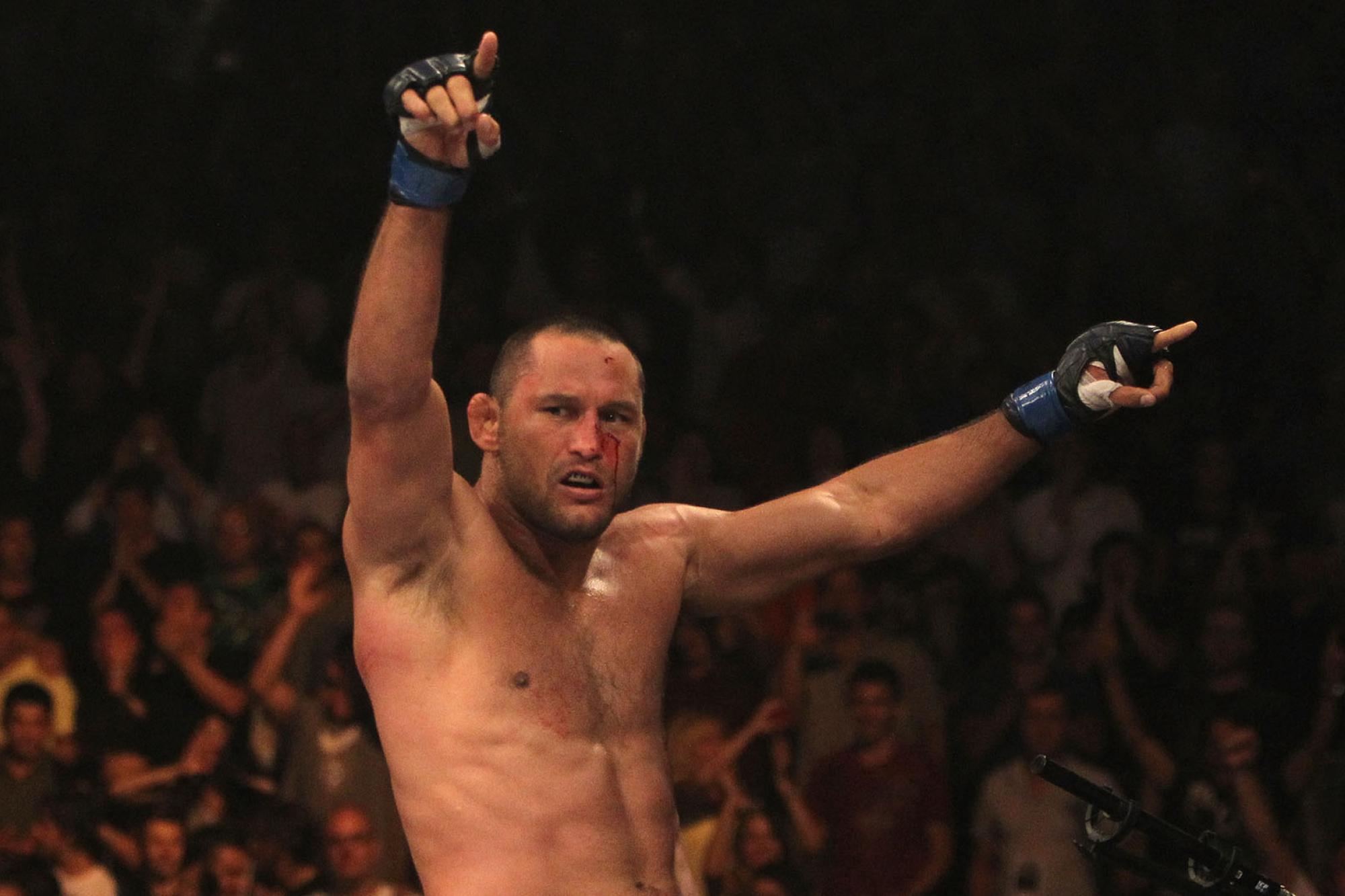 Dan Henderson’s UFC career exists in three parts, with each returning feeling like a new beginning.

Long before he rose to prominence as a two-division world champion under the PRIDE FC banner, the two-time Olympian followed his longtime friend, teammate and training partner Randy Couture into mixed martial arts, viewing the burgeoning sport as a means to supplement his income and fund his pursuit of making a third Olympic team.

“When I first started fighting, it was more to make a little money to keep wrestling and it turned into loving the sport,” said Henderson, who retired following his middleweight title fight with Michael Bisping at UFC 204 in Manchester, England. “My main goals were set in wrestling and I had zero goals in MMA.”

In the summer of ’97, Couture lobbied Henderson about heading with him to Brazil — the future Hall of Famer was planning on competing in the heavyweight tournament at the Brazil Open and suggested his teammate enter the lightweight competition.

Henderson signed up, went to Brazil, and collected a pair of victories to win the lightweight tournament, but it was another American wrestler, Tom Erickson, not Couture, who ventured to the South American fighting hot spot alongside Henderson and won the heavyweight tournament.

Couture withdrew in order to make his first foray into the Octagon two weeks earlier at UFC 13.

A year later, Henderson would follow suit, taking part in the four-man middleweight tournament at UFC 17 in Mobile, Alabama.

Dan Henderson is one of the greatest to ever set foot in the Octagon, and his performance in Pride's 2005 Welterweight Tournament was legendary. Enjoy this look back at one of Hendo's greatest achievements.

“By today’s standards, it would have been a smaller UFC event, but it was definitely a little different fighting out there,” he said, recalling his promotional debut. “The tournament thing was a little different than what you see today as well, but my first event down in Brazil was a tournament and I was a wrestler, so I was used to having multiple matches in a day, so it wasn’t a big deal to me to compete in a tournament.

“But I had never sparred before and I didn’t know how to prepare for an actual fight,” said Henderson. “I was a wrestler that was learning the submissions and then I would hit focus mitts and the bags and that was my boxing practice. It wasn’t until after that UFC that I started actually sparring with guys.”

That night, Henderson scored a unanimous decision win over Allan Goes to advance to the finals, where he collected a split decision victory over future welterweight champion Carlos Newton, suffering a broken jaw in the waning minutes of the fight.

The twin victories gave him a 4-0 start to his mixed martial arts career, but competing in the cage was still just a side hustle to Henderson, whose focus remained on the wrestling mats.

It wasn’t until he failed to qualify for the 2000 Olympic team and came up short at the World Team trials in 2001 that the Team Quest founder committed himself full-time to a career in MMA. 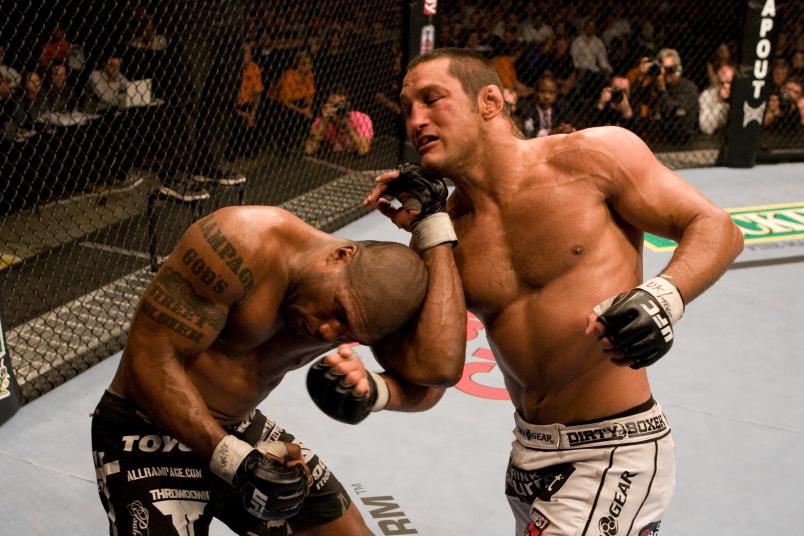 ALLOW ME TO RE-INTRODUCE MYSELF

Henderson didn’t make his second appearance in the Octagon until UFC 75 in London, England, more than nine years after his first foray into the UFC cage.

After debuting as a relative novice who relied on his wrestling skills and all-around toughness, he returned as one of the best pound-for-pound fighters in the world, returning from Japan as both the PRIDE FC welterweight and middleweight champion — which translated to middleweight and light heavyweight in the UFC.

Fresh off a knockout win over Wanderlei Silva in his final PRIDE appearance, Henderson returned to the UFC and walked right into a showdown with Quinton “Rampage” Jackson, who had won the light heavyweight title in dramatic fashion by knocking out Chuck Liddell in the main event of UFC 71 four months earlier.

“I definitely was a lot better as a fighter,” joked Henderson when asked about his return to the Octagon at UFC 75. “The one thing that I was not completely prepared for or used to was the cage and the rules were a little different from what I had been doing for the last seven years in PRIDE.

“I remember tripping over the cage once or twice because I wasn’t used to having that where my feet are, along the edges of the canvas,” he said. “I was used to fighting in a ring with ropes and nothing to trip you. Having your opponent walk his feet up the cage to push off and get away — I wasn’t used to that either.

“Those were the biggest things I took from coming back to the UFC was just that I wasn’t used to that cage yet and probably should have had a tune-up fight before having a title fight.”

Not only did Henderson not get a tune-up fight, but didn’t get an easier time of things in his second bout after returning to the UFC either, transitioning from his light heavyweight title fight with Jackson in September to a middleweight championship bout against Anderson Silva five months later in Columbus, Ohio.

After dropping a decision to Jackson, Henderson started well against Silva, who was less than two full years into his reign atop the 185-pound weight division. Two minutes in, Henderson put Silva on the canvas, landing in side control, where he scored with hammerfists, elbows and short punches as the Brazilian seemed to accept that he would be spending the remainder of the round on the canvas.

But Silva turned the tables in the second, hurting Henderson midway through the frame and putting the wrestler’s back to the mat after he failed to complete a desperation takedown. Two minutes later, “The Spider” was locked onto Henderson’s back, his left forearm fished under the chin, forcing him to tap to a rear naked choke. 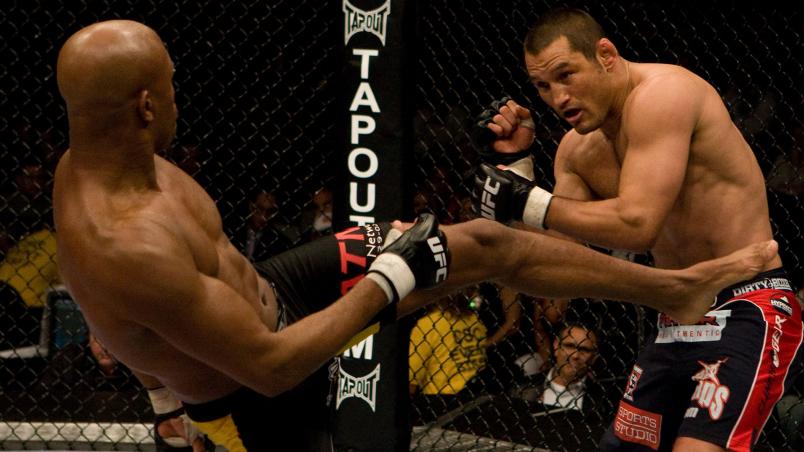 “It was nice to be able to have back-to-back title fights,” started Henderson, who felt the bookings were an acknowledgement of all he had accomplished in PRIDE and a way to introduce him to the UFC audience who may not have been familiar with his handiwork in Japan. “Unfortunately it was under different types of rules, the time was different, it was in a cage, not a ring, and I wasn’t really prepared for those changes the way I should have been.

“I felt like I did enough to beat Rampage in that first one,” he added, “and the second one, I had a flat night and just didn’t feel like I did in other fights. I had a bad night and lost to Anderson.”

Following the twin title losses, Henderson would remain at middleweight and register a win over Rousimar Palhares before venturing back to light heavyweight and beating Rich Franklin. He was then tabbed to coach a team of American fighters opposite a British contingent led by rising star Michael Bisping on the ninth season of The Ultimate Fighter, with the coaches squaring off on the main card of UFC 100 that summer.

Originally a battle of top contenders, the bout morphed into a grudge match as the two squads and the opposing coaches spent the entire season getting under each others’ skin. A world-class irritant, Bisping was on the upswing — a brash former Ultimate Fighter winner who had rattled off three straight victories since moving to middleweight — and his demeanor rankled the laid back and laconic Henderson, turning their collision at the company’s centennial show into a must-see matchup.

While it proved to be one of the signature victories of Henderson’s career, his UFC 100 knockout of Bisping was also the climax of his second stint on the UFC roster. 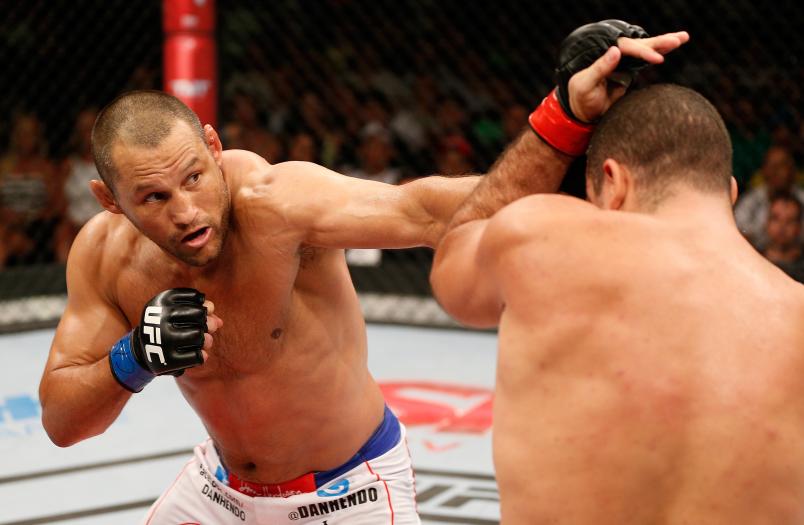 A four-fight run under the Strikeforce banner yielded four victories for Henderson, including a light heavyweight title win over Rafael “Feijao” Cavalcante and a first-round technical knockout win over Russian icon Fedor Emelianenko.

Four months later, Henderson was back in the Octagon, taking on Mauricio “Shogun” Rua in the main event of UFC 139 in a bout that remains one of the greatest fights in UFC history.

For 25 minutes, the former PRIDE standouts went back-and-forth, blasting each other with power shots that left you wondering how they managed to remain standing. Whenever one would build some momentum, the other would come roaring back, digging deep to shift the tides in their favor rather than wilting under the pressure as the punches piled up.

“The popularity of the sport had grown and that was right around when they did the FOX deal,” recalled Henderson. “It had already grown a bunch, but then that was another step in broadening the viewership. It was still the same as it used to be (in terms of the events themselves), but there was a lot more notoriety and viewership and you could feel that.

“Shogun is still out there doing well,” he added of his UFC 139 opponent, who picked up a victory over Tyson Pedro earlier this month in Adelaide, Australia. “He was a tough competitor, well-rounded, and I know I was pretty prepared for him, but I definitely threw a lot of heavy, hard shots in that fight and got tired.

“That was the thing that stands out the most is that I got tired in that fight.”

What everyone else remembers is that the two veteran warriors beat each other from pillar-to-post for five rounds, delivering the best fight of the year while proving they were both still very much contenders in the light heavyweight division.

Though it was an epic start to Henderson’s third and final run in the UFC, the Temecula, California-based fighter struggled to find success from that point forward, turning back the clock in a second win over Rua and a first-round stoppage of Tim Boetsch amidst a collection of losses to top talent, first in the 205-pound ranks and then back down at middleweight. 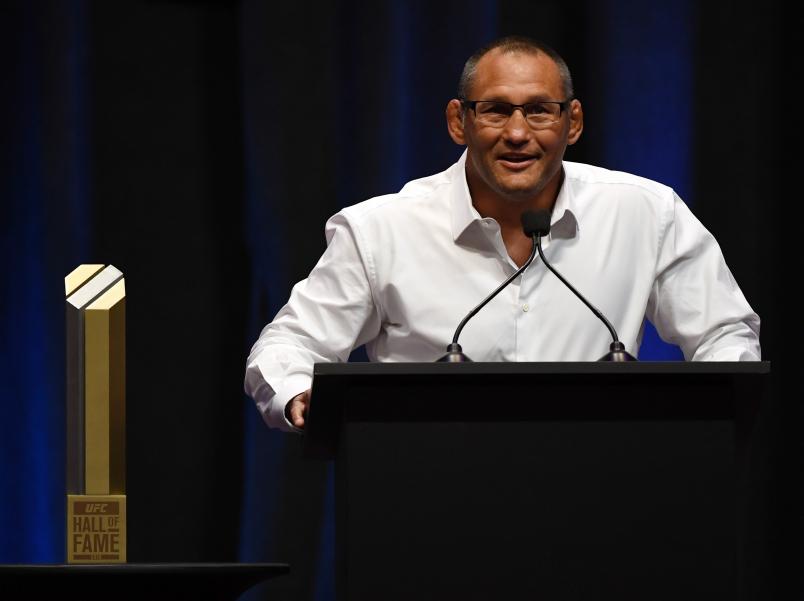 After collecting a second-round knockout win over Hector Lombard at UFC 199, Henderson, with his family joining him inside the Octagon, bid farewell to the sport, going out on a high note.

But later that evening, his old rival Bisping shocked the world by winning the middleweight title and rather than ride off into the sunset, the old war horse opted to ride into battle one more time, meeting “The Count” on his home turf in Manchester four months later; one last fight, complete with a chance to claim UFC gold.

Though he had his moments — and the bout earned Fight of the Night honors — Bisping prevailed and Henderson bid the sport adieu, this time for real.

Now a little over two years removed from his time as an active competitor — and busier now than he was then — the 48-year-old has nothing but fond memories for the time he spent inside the Octagon.

“They’re all right up there,” he said, when asked if any one moment stood out more than any others over the course of his 18 fights under the UFC banner. “I loved not every fight, but most of them.