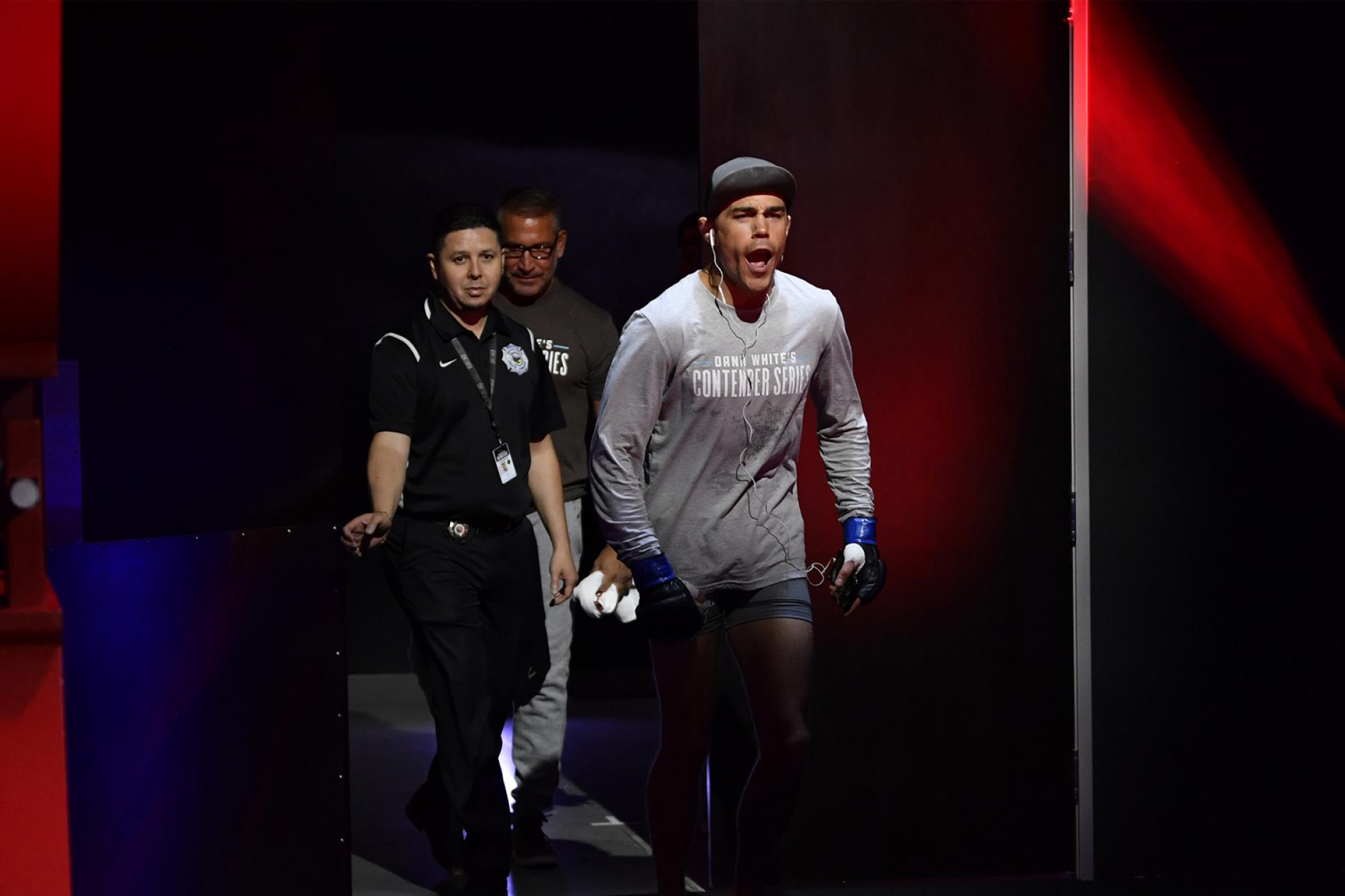 Pete Barrett Came Back From The Brink

It's been nearly a year since his last fight and since competing on Dana White's Contender Series, Pete Barrett has battled his demons to chase his dream.
By Thomas Gerbasi, on Twitter: @TGerbasi • Aug. 4, 2020

When Peter Barrett steps into the Octagon for the first time to face Youssef Zalal this Saturday in Las Vegas, it will have been 347 days since the last time he got in a sanctioned fistfight.

That’s too long for “Slippery Pete,” but he is confident that it will be all worth it come fight night.

“This is long overdue and will be well received by the masses, I'm sure of that,” said Barrett, who has officially waiting for his UFC debut since he won a contract with the promotion on season three of Dana White’s Contender Series last summer by beating Sanghoon Yoo. But if he’s being honest, the wait has been a lot longer than that.

Yet despite his eagerness to share the stage with the best featherweights in the world, the 33-year-old was determined to do whatever he could to make sure he got the right work in before accepting a fight. That made an April matchup with Danny Henry an interesting one, considering it was going to take place in the middle of the COVID-19 pandemic with Barrett unable to get the training he wanted. He still accepted it and was ready to go, but the card and the fight were ultimately scrapped.

Soon, Barrett was able to get back to some sense of training normalcy, and he put July as the date he wanted to be ready by.

“In my mind, I picked July 19,” he said. “That was just a date I told myself I'd be ready by. Then August 8 was presented and I would be hard pressed to not take that fight.” 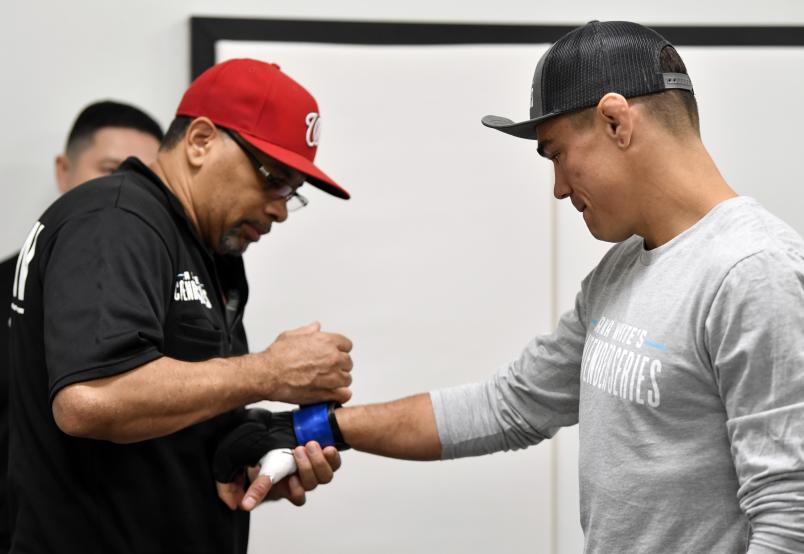 Peter Barrett has his hands wrapped prior to his fight during Dana White's Contender Series season three week 10 at the UFC Apex on August 27, 2019 in Las Vegas, Nevada. (Photo by Jeff Bottari/Zuffa LLC)

Steve Garcia was lined up as his opponent, but when Garcia withdrew from the bout, Zalal stepped in. It doesn’t matter at this point for Somerville’s Barrett. He’s getting to fight, and the name doesn’t matter, nor do the circumstances of still being in a COVID-19 universe. Not that it’s been easy.

“I do believe everything happens for a reason, and sometimes it's harder to see in real time, but I think that it was good to have the ability to slow down for some introspection, to have an 'oh s**t, come to Jesus' moment when I was kinda freaking out about the last fight,” said Barrett. “I feel like I broke under that pressure and I wasn't in a great place mentally. I would have gone out and fought if I had to, but I'm happier that we're getting a new version of me in August. And in the last two, three months, I've really been able to focus on my students, the people that I work with, which has given me an opportunity to really dig into this fight - practicing what I preach, seeing how I'm teaching it, is that how I really do it? It gives me an opportunity to break my kicks down, break my punches down, break my technique down and see how everything should be going versus how everything is going.”

He also has a good example for how to succeed in these vastly different times in the form of fellow New Englander Calvin Kattar, who has won twice since the pandemic hit, beating Jeremy Stephens and Dan Ige to continue his rise up the 145pound ladder. He even headlined on Fight Island on July 15, something Barrett sees as a historic touchstone for all who competed there last month.

“I am so happy for that kid,” said Barrett. “He's been busting his ass for the last 10-15 years to get there, and now he's the main event on Yas Island. No matter what I do in the next five years of my life, there may never be another fight on Yas Island. If that's the case, there's only gonna be a few people to ever headline that venue. I would have loved to have been a part of that, but I'm super happy for the guys that got to do it. 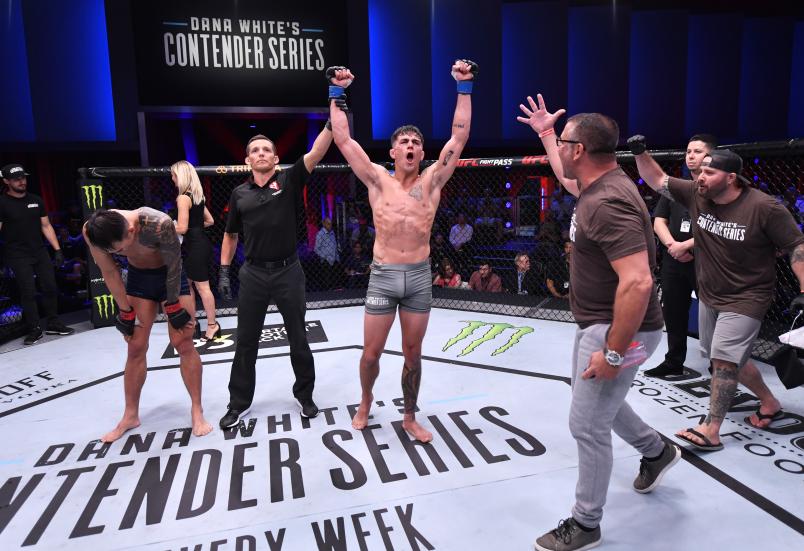 “During the pandemic, I broke mentally, and I let the pressure in, and I focused on the things I couldn't control,” he continues. “And then you've got guys like Calvin who became a better fighter and put on one of the best performances of his life through the same s**t that broke me down. I like to think I'm a pretty humble dude and I can admit that and recognize that there's so much more inside of me that I could have relied on that I didn't, and now I know that moving forward.  I needed to break down and have a minute with myself to realize that there are other people getting better while I'm concerned about not having what I want.”

That honesty from Barrett is rare in the fight game, where lying to yourself (that punch didn’t hurt, this weight cut’s not that bad) is part of the gig. The 33-year-old southpaw used to be like that too, at least until it didn’t work for him anymore. But after losses in and out of competition took him to the lowest of lows, he found his way back to the biggest fight of his life and the moment he’s been training to reach for years.

“I saw that my depression was manifesting in my fight career and I was doing a pretty good job hiding it everywhere else,” Barrett said. “And the issue I was having was on fight night, was I able to look back on my camp and say I crossed every T and dotted every I? Was I a hundred percent at every session? Because if I had the confidence in what I did to get there, then I am f**king Superman on fight night. I am a God and I am indestructible. And that's how the first eight fights of my career went. Fight night, get my hands wrapped, I'd look back. Did I do everything, was everything right, was I giving a hundred percent a hundred percent of the time? Let's say I was only there 80 percent of the time, but was I there a hundred percent during that 80? Those are the questions I ask myself. And if I'm as prepared as I could be, then nothing else matters. And that's the conversation I have with myself on fight night before I get to the cage.”

That talk is only a few days away. But he knows the answers already.

To kick off Hispanic Heritage Month, the Fighter Timeline series features Cain Velasquez and five of the biggest fights of his UFC career.

In honor of Khamzat Chimaev's 10 day turnaround for his fight against Gerald Meerschaert at UFC Vegas, we look back at the Top 5 fastest turnarounds in UFC history.