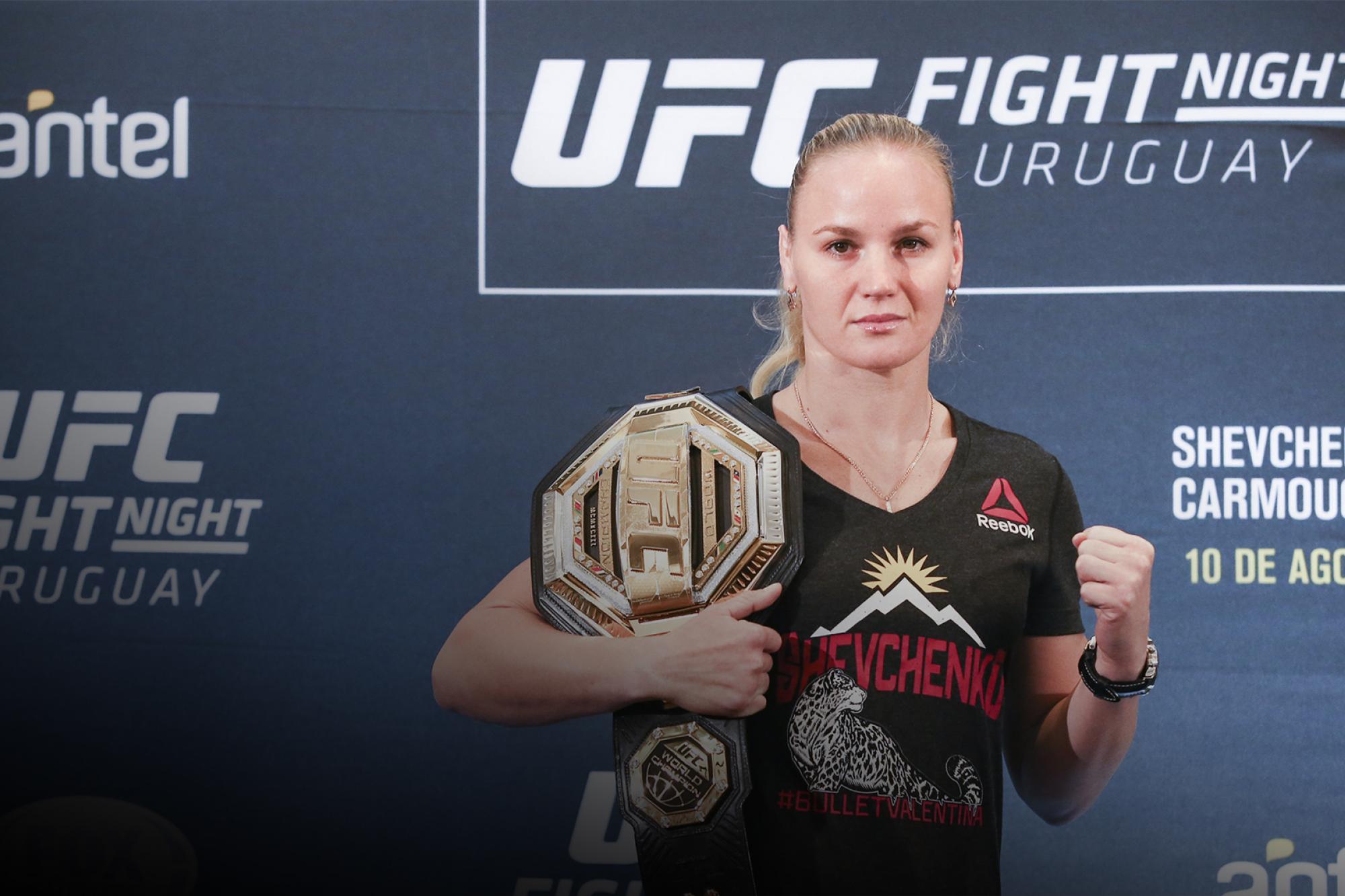 Shevchenko Knows All About Champ Life

Valentina Shevchenko has been a world champion longer than most, so she knows exactly what comes with that territory.
By Thomas Gerbasi • Aug. 9, 2019

As a world champion, every fight is the biggest fight of your life. If we’re talking about kickboxing and MMA, Valentina Shevchenko has been a world champion longer than most, so she knows exactly what comes with that territory.

Yet despite this, there was the UFC women’s flyweight champion in Newark, New Jersey last week, helping her sister Antonina prepare for her bout with Lucie Pudilova, even though her title fight with Liz Carmouche was rapidly approaching.

“This is our life,” said Shevchenko. “We support each other every time.”

Most sibling teams would say the same thing. Most would also opt to stay in training camp and avoid the travel and stress the week before their fight. But Shevchenko is a unicorn in the fight game, and she didn’t even blink an eye when it was time to pack up for the Garden State before turning around for an approximately 20-hour trip to Uruguay to face Carmouche this Saturday.

“We had a similar situation a few months ago when I fought Joanna (Jedrzejczyk),” said Shevchenko. “Antonina fought one week before me against a Korean opponent (Ji Yeon Kim) in Las Vegas and the next day we flew to Toronto for my fight with Joanna. For me, it's okay. When you have everything easy, you don't know how to react. But when you have these kinds of obstacles every time in your way, it makes you stronger and prepared more and more for your fight. I don't have any options. I must be in her corner.”

We should all have a sister like Valentina Shevchenko. Well, Antonina defeated Pudilova, earned a Fight of the Night bonus and then it was off to Uruguay for Valentina’s second title defense against the first woman to beat her in MMA, Carmouche. It wasn’t particularly a revenge match she was chasing after, but fighters fight, and when presented with the opportunity to headline this weekend, she was all in.

“I expected that we would fight someday,” said the champion. “I didn't know when, but I knew it was gonna happen because she was going up in the rankings at flyweight. I thought it was going to be Katlyn (Chookagian), but UFC offered me this opportunity and I took it. I'm not a person who will say no. I wasn't going to wait for six months. I'm feeling good after my last fight, I didn't have injuries and I took this fight. I know it's gonna be a good fight, she's a strong MMA fighter, but I will do my best because my goal is to keep the belt for a long time.”

This may be a goal realized, because while Shevchenko was world-class at bantamweight, coming perilously close to beating current double champ Amanda Nunes, she’s on a whole new level at 125 pounds in the Octagon, where she’s defeated Priscila Cachoeira, Joanna Jedrzejczyk and Jessica Eye in succession. She will also be a favorite this weekend against Carmouche, but motivation isn’t hard to find for the 31-year-old.

“My life is my motivation,” she said. “What I do in martial arts is my biggest motivation because I love my lifestyle, I love what I'm doing, and it doesn't matter what I'm gonna do, I will do my best to be the best in everything that I'm doing. This is my biggest motivation because I just want to feel alive and to fight. I know for a fighter it's very important to be active and feel this adrenaline all the time and now I'm healthy, I'm young and I feel that I can do this. That's why I have to use my time and do the right things to do the big things.”

But what about that whole 20-hour trip?

“It bothers everyone the same way, and it bothers me more when it's fight week,” she laughs. “It's a long flight, but we have a few days to acclimate in Uruguay, so the fight won't be so bad. I had some cases where I had to travel a day before the fight and you literally have a 20-25 hour flight straight to weigh-ins and then the next day's the fight. I've been through this before, so I'm prepared for any situation.”

“It's the way you look at it,” Shevchenko explains. “For example, I see obstacles in my way and I try to find the way to resolve it. I don't complain about, 'Oh, what am I gonna do, I don't know what I have to do now.' I'm just not the person to complain because I know it doesn't help me. Only one thing will help me and that's focusing on what I have to do to perform the best way that I can and then I start to figure out what I have to do to feel comfortable.”