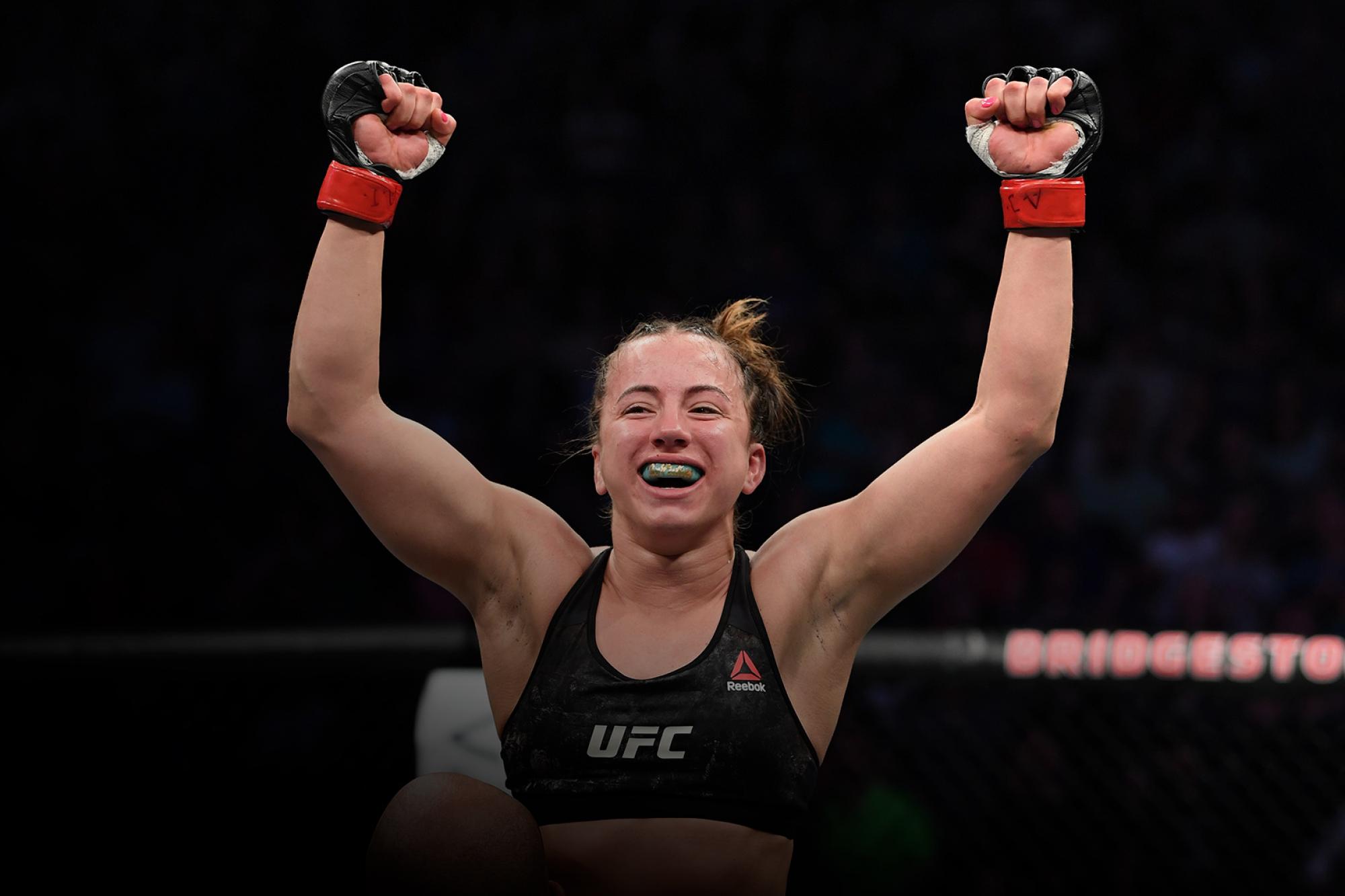 Before the main card action kicks off, this is what you need to know about the UFC 246 Prelims.
By Zac Pacleb, on Twitter @ZacPacleb • Jan. 17, 2020

The lights are always a little brighter when Conor McGregor’s name is attached to a card, and UFC 246 is no exception, despite a more measured, cordial approach to fight week from “The Notorious” one. Every fighter knows the eyeballs his name brings, and they know it’s a prime moment to boost their name as well.

Beyond the surefire action-packed main event between McGregor and Donald “Cowboy” Cerrone, UFC 246 features a bevy of up-and-coming prospects who seem well on their way to the top of their respective divisions. While everyone is keeping their eyes turned toward the main event, these are the storylines that are worth putting the TV on a couple hours early.

Ever since she stepped into the Octagon, Maycee Barber hasn’t shied away from the spotlight. Her goal to break Jon Jones’ record and become the youngest UFC champion ever doesn’t seem like an aspiration as much as a tangible pursuit. Since making her debut in November 2018, she has kept her name relevant between a mix of talking a big game and making good on that talk.

In three fights, Barber racked up three TKO finishes, most recently and impressively a first-round stoppage over fellow up-and-coming flyweight Gillian Robertson in Boston. It was Barber’s most dominant performance yet, displaying the power and finishing instinct that makes her such an intriguing fighter. After moving up to flyweight and linking up with Duke Roufus and company in Milwaukee, a title shot feels within reach this year. However, she must first handle her first top-10 opponent in Roxanne Modafferi, a veteran in the fight game and one who isn’t a stranger to slowing down an undefeated hype train.

“The Happy Warrior” took out Antonina Shevchenko in mid-2019 and showed she still has more than enough to be a problem for Barber. Despite her standing as the biggest underdog on the card, Modafferi isn’t a slouch and has been fighting professionally since 2003. She’s a tricky veteran who is keen on renovating her game as much as she can. As dominant as Barber has been, she faced real adversity against JJ Aldrich and can get herself in trouble when she isn’t calculated. If she puts together another freight train of a performance, though, she won’t be far off from knocking on Valentina Shevchenko’s door next.

With an entertaining fighting style and a measured confidence on the microphone, Sodiq Yusuff is primed for a big 2020. A Contender Series graduate, Yusuff most recently put on a show in a one-round banger of a fight against Gabriel Benitez at UFC 241. He kind of called his shot ahead of the fight, saying he wanted to reward the matchmakers’ decision to put him on the main card by providing an entertaining fight and finish, and he delivered. The Nigerian-born 26-year-old now gets his biggest step up in competition in the form of the man that Max Holloway cited as his toughest competitor.

The vibe around Andre Fili seems to have changed as of late. Winner of four of his last five fights – the lone loss coming by split decision to Michael Johnson – Fili picked up a long-awaited finish in front of friends and family at UFC Sacramento in July. Fili said working with a sports psychologist has helped him handle the ups and downs of the fight game, and with that training, he’s making good on his potential. Although more than half of his fighting career has come under the UFC banner, Fili is still only 29 years old with plenty more to give. He is much more than a veteran being fed to a prospect as a test; this is a real fight with real top 15 implications. On top of that, it’s a clash of two guys who are bound to throw often and throw hard.

Once you get past how much Nasrat Haqparast looks like middleweight contender Kelvin Gastelum, what you’ll find is a hard-hitting, tricky fighter ready for the shark tank that is the lightweight division. After finishing all eight of his wins en route to the UFC, Haqparast finally got his first stoppage in four UFC bouts with a fire-fist performance against Joaquim Silva in Newark. Haqparast is a brick of a lightweight prospect with Georges St-Pierre in his corner, but he faces a tough test in Drew Dober, who is coming off a big first-round finish against Marco Polo Reyes.

Dober’s UFC run got off to a slow start back in 2014, but he is 6-2 since 2016 with three first-round knockouts, and he feels as good as he’s been. At 31 years old with 13 UFC contests under his belt, he provides a strong, physical test for Haqparast and could very well gain some traction toward a top 15 bout himself.

For more information and updates, sign up for the UFC Newsletter here.