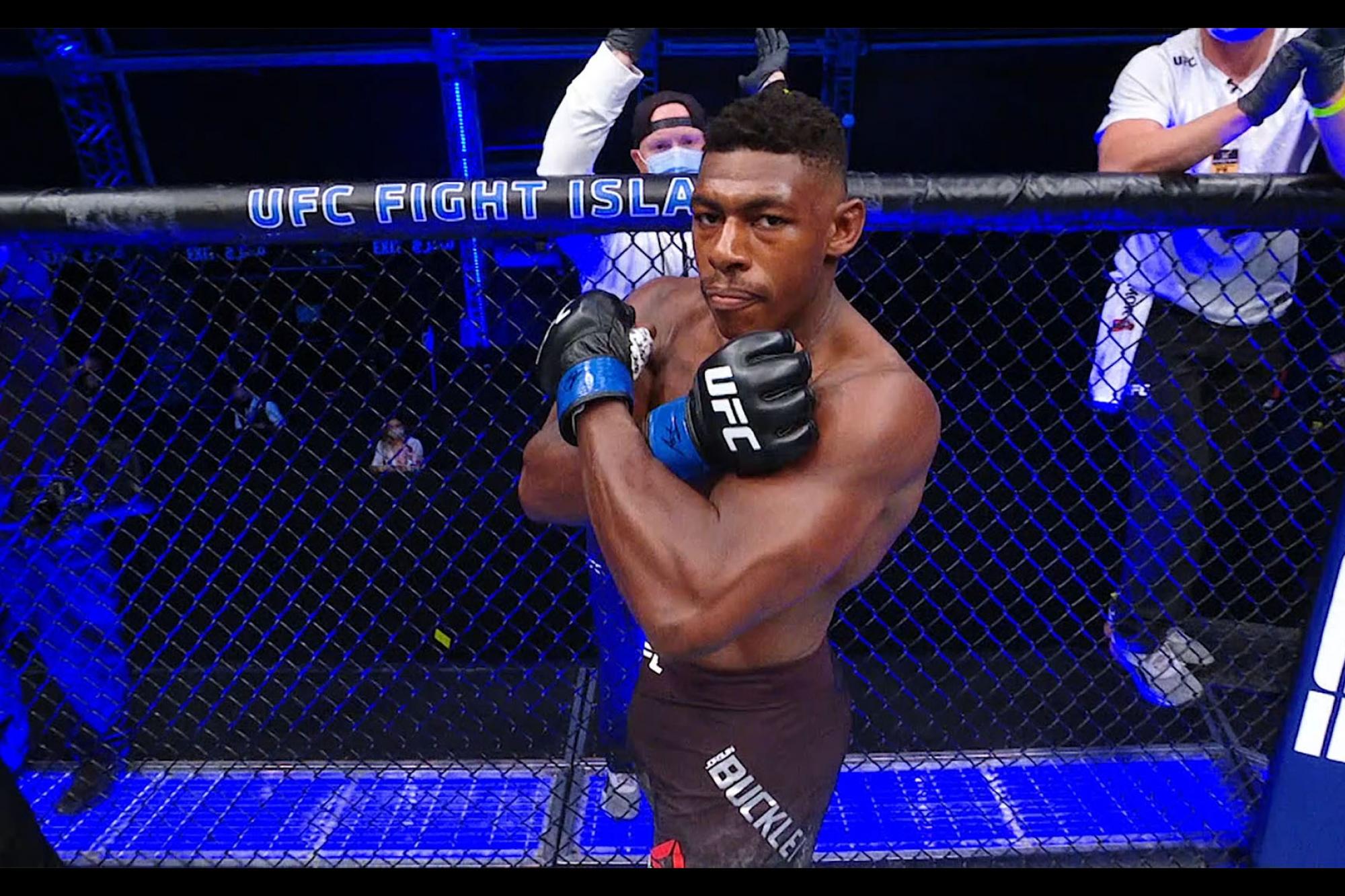 Middleweight Reflects On A 2020 Filled With Thrills And Blessings Ahead Of UFC 255
By Steve Latrell, on Twitter: @TheUFSteve • Nov. 19, 2020

If you’ve ever been lucky enough to attend a UFC event in person, you know that magic moment when the main card is about to begin. Sometimes you can even hear it on the television broadcast. The lights get low, and accompanied by The Who’s “Baba O’Riley”, fans are treated to a montage of the greatest clips of the company’s history; the finishes, the champions, the oh-my-God moments. The crowd gets to their feet and cheers, and no matter how many times you experience it, it never gets old.

When live audiences can once again return to the arenas post-pandemic (and may it be soon), few things are more certain than the montage being updated to include the epic spinning back-kick Joaquin Buckley delivered to Impa Kasanganay just last month on UFC Fight Island.

“For me to realize it’s going to play forever…when I’m out of the UFC, when I’m retired, they’re going to be playing it,” Buckley says with a mixture of pride and amazement. “That’s pretty cool, to know in the future that’s going to be happening.”

Pretty cool doesn’t start to cover it. You’ve likely seen the clip dozens of times or more already. Like a video game move sprung to life, the instantly iconic knockout made people remember the name Joaquin Buckley and brought new sets of eyeballs both not only to the UFC, but the sport of MMA itself. Not bad for your second fight in the promotion.

Just weeks earlier, Buckley was punching the clock at Walgreens when he got the call to fill in on short notice against Kevin Holland. It was a stressful few days and Holland would go home with the win, but Buckley looked good enough to get a quick turnaround a month later versus the previously undefeated Kasanganay. The rest, as they say, is history. But having the viral MMA clip of the era and a new visibility in the sports world has done little to alter the existence of the St Louis middleweight.

“Not as much as everybody thinks,” he says, explaining that most of the attention lives on social media, not in his home. “Because everything that’s going on with COVID, I’ve got to stay in the house. If I’m leaving the house, I’m going to training or going to work. Really it’s just been training, being disciplined and staying in the crib. Taking care of my baby.”

Ah yes, fatherhood. His son arrived shortly after his UFC debut, cementing 2020 forever in his heart.

“Its been a beautiful time for me, even with everything that’s going on with COVID. I was still able to have light with my son coming here, which is my biggest blessing over everything, getting signed with the UFC and then having the craziest knockout of all-time. It’s just all back-to-back hits. It’s a blessing. I ain’t ever going to forget this year.”

After his stunning knockout on Fight Island, middleweight contender Joaquin Buckley isn't folding under the pressure to provide more highlights as he takes on Jordan Wright at UFC 255.

The year isn’t over yet, of course, and he’ll get to add another memorable event Saturday night at UFC 255 when he’ll get locked in the Octagon across from Jordan Wright, another unbeaten big man looking to gamble his 11-0 record with Buckley. And if he’s feeling any pressure to produce a sequel to his viral hit, he isn’t copping to it.

MORE UFC 255: Fight By Fight Preview | How To Order | Brandon Moreno | Every Finish By Shogun Rua | Embedded | Rise Of Alex Perez | Countdown | Fighters On The Rise | Free Fight: Shevchenko vs Chookagian | Inside The Octagon

“Everyone keeps talking about this pressure. There ain’t no pressure. This is what I love to do. This is what I’ve been dreaming of doing since I was a kid. This is something that I thrive through. So if you all try to bring the pressure, you’re just going to make me fight better. When you all put the lights on me, that’s when I thrive. That’s when I succeed. Ain’t no pressure to me. It’s what I love. It’s what I feed off of.”

His career to date backs up that sentiment. Eight of his 11 pro wins have come by knockout, making him a fan favorite in promotions like LFA and Bellator before arriving in the big show. Buckley knows what fans want to see, and he wants to give it to them.

“I guess I’ve always been like that; I always wanted to put on a show. Even when I used to wrestle, I wasn’t the best wrestler back in high school, but everybody knew that they were ready to watch something. I was always just living off the audience and the lights…I just thrived off of it. I love that type of feeling. All eyes on me. I love it.

So exactly what kind of show does he have in mind this Saturday?

“I see it going my way. I always see myself victorious within any fight that I go through. I’m not going to force it, but I‘m seeing it. I can see that I can do what I’m capable of doing by getting that first-round finish. I’m just putting it out there on the Earth. When you speak things into existence, it can happen. For sure.”